The long blade of a knife pierces through pink skin and slices along the spine. A woman pulls out a hacksaw and hunches over the body, sawing away at the bone. She digs her fingers under the rib cage and yanks it upwards with a loud crack. There is a hog carcass on the table and Chef Larissa Popa is doing a pig carving demonstration at the Charcuterie Masters by New York Epicurean Events in Flushing, Queens. She artfully glides her metal tools through the layers of red meat and white fat that will be made into sausage, salami, bacon, pig butter and pork rillettes. “Nothing has to go to waste on the pig,” says Popa, “except their toenails.”

Chefs, butchers, farmers, gourmets and meat enthusiasts gather at Flushing Town Hall on a brisk Saturday in February for a culinary competition that celebrates all things pork from nose to tail. Meat, cheese and wine artisans from across the country set up shop inside the 154 year old brick building – some keeping it simple with slivers of salami on paper plates, others creating extravagant displays with roasted pig heads and pork legs hanging from wooden rafters, hooves intact. Everyone’s hands are full of bites and drinks and the warming scent of smoked meats and rendered fat permeates the room. The wooden floorboards creak as people move from table to table. 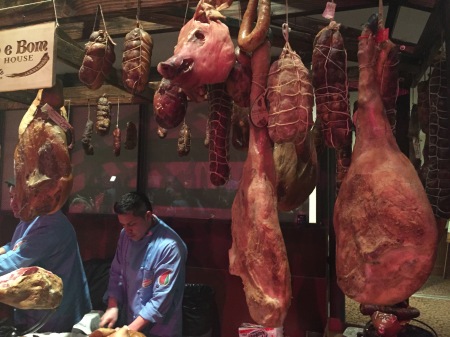 Chris Andersen boasts that he brought something original to the market when he imported the Mangalitsa pig to the United States in 2007. After first tasting Jamón Ibérico de Bellota in Spain ten years ago, Andersen realized that there weren’t any products like that in the U.S. at the time. He left his job as an investment banker and imported several of the pigs. He now owns Møsefund Farm in Branchville, New Jersey, where he breeds Mangalitsa pigs to keep them from going extinct. They have a high content of monounsatured fat, which leaves no oily residue behind in the meat they produce. Andersen says, “People are afraid to put fat on the plate but the flavor is in the fat.”

At his stand at the Charcuterie Masters, Andersen’s chef offers paper-thin slices of Mangalitsa meats. The coppa calabrese has a peppery and grassy taste that melts on the tongue but leaves your mouth feeling clean instead of greasy. “If you have an addictive personality,” Andersen says, “Don’t try it. It’s crack.”

Guests with a sweet-tooth stop by Roni-Sue Chocolates’ stand to sample the “pig candy,” or chocolate covered bacon. “You can’t get this from Hershey’s,” says one man as he pops his third helping into his mouth. “God forbid!” responds owner Roni-Sue Kave.

The stand is bright and lively, standing out with a red tablecloth, miniature pig statues, a pink pig alarm clock and pig cartoons. Kave’s shop in the Lower East Side of Manhattan sells the pig candy along with other bacon-centric treats, including maple bacon lollypops and honey caramel popcorn with bits of candied bacon. “I thought the pig candy would be popular for a day and a half, but here we are nine years later,” says Kave. “Bacon makes everything better.”

Doug Keiles, pitmaster and owner of Ribs Within BBQ Team would agree. After all, he was awarded the title of first place bacon winner by the panel of judges at the end of the night. His setup consists of a slab of whole Amish raised pork belly, uncured and not injected with any nitrates. His team hand rubs the meat, roasts it in the oven for two hours, braises it for 45 minutes and Applewood smokes it for 45 minutes to perfection. Keiles slices the finished hunk of pork belly into crispy slices of bacon and fries up bits of fat to add to each plate. Guests squeeze past each other to get to his corner stand. It is easy to spot with its sizzling skillet and three person team in tie dye red and orange t-shirts.

With an endless array of meat options, plenty of people are searching for something cool to wash it all down with. Enter Brooklyn Cider House, a brand new cidery that is slated to open in mid-July. Lindsey Storm quit her job on Wall Street to join the cider business in August. With her new job title of “Cider Goddess,” Storm pours the chilled fermented apple drink into plastic shot glasses for guests to gulp down. There are two options: the light and fruity “still bone dry” flavor or the crisp and tart “kinda dry” flavor. “We make it as natural as possible with no flavorings to showcase the apple and show how versatile it is,” says Storm as she opens another bottle. 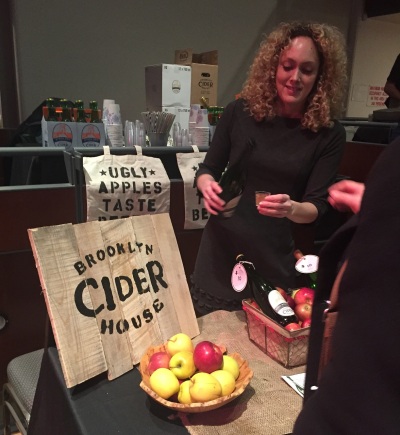 In a grassy tented yard out back, Larissa Popa continues her pig breakdown demonstration. The pig gets smaller and smaller as Popa carefully carves out different cuts of meat. Her silver spoon-shaped earrings dangle while she works. Her black wrist tattoo of a threaded sewing needle pops out from her white latex glove. The engaged audience clusters around the table. Fellow butchers pick up tips of the trade and wide-eyed foodies enjoy the show.

Popa believes in nose to tail eating so that nothing goes to waste. She explains how the fat can be melted into butter, used in cake frostings or made into candles. Popa points out the glands on the pig, trimming it out and passing it around. “The glands tell you the health of the animal – how they lived and how they died,” says Popa. “You don’t want a stressed animal because it will affect the taste.”

One woman asks if she can try a slice of the raw meat from the leg. Another butcher cuts her a sliver and she places it on her tongue. “Delicious,” she says.

As Popa gets down to trimming the last of the pig’s torso she asks, “Does anyone have any special requests?”

One man shouts out, “Yeah, can you make us all breakfast in the morning?” 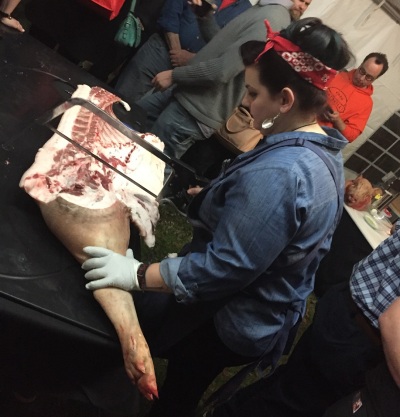